Your basket is empty. 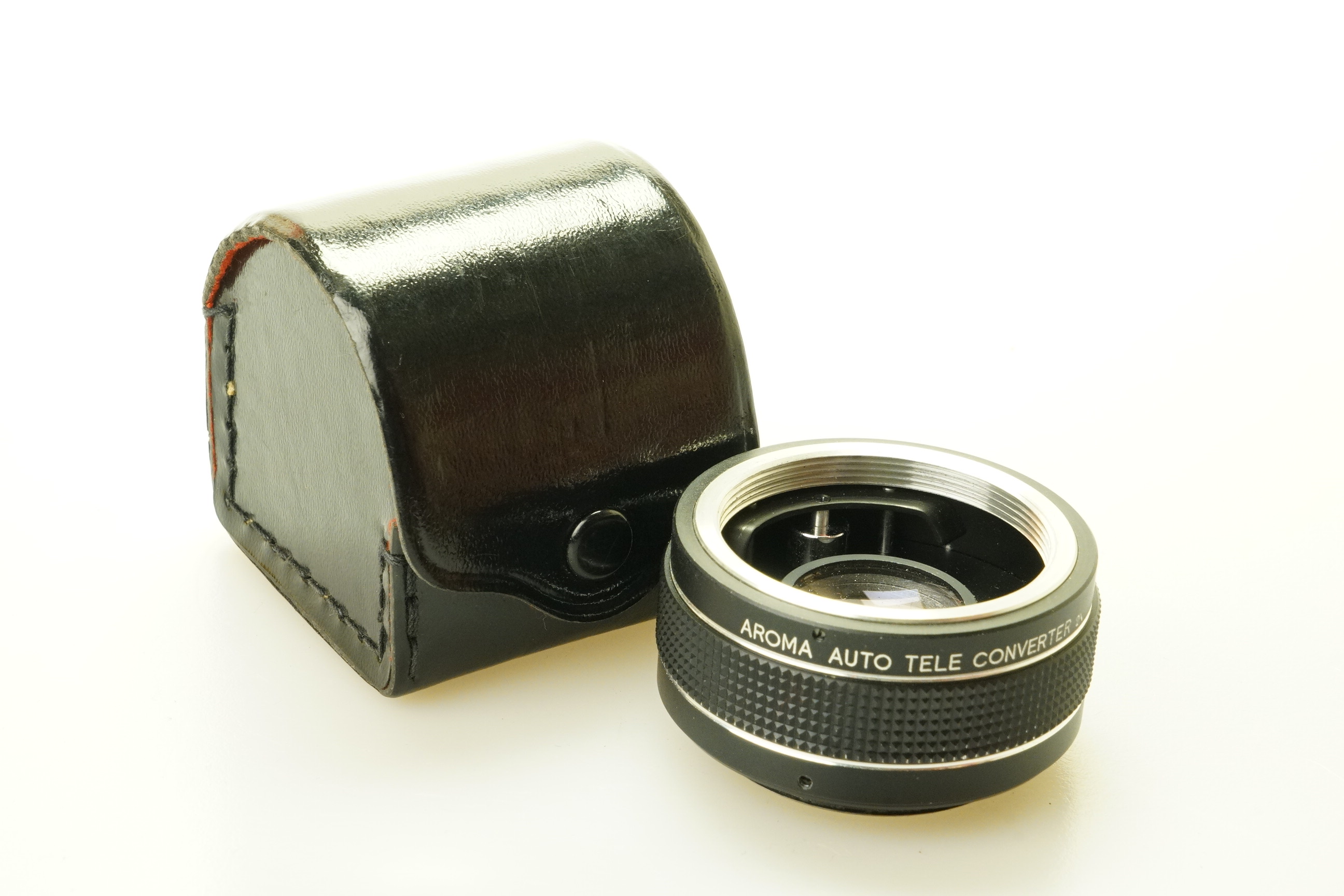 There are currently 0 reviews for Aroma Auto 2X Tele Converter M42 Screw fit in case. Use the tabs below to read reviews, ask a question, add your own review, see delivery information or check our Maintenance tips.

The 42mm screw mount was introduced in 1949 with the Contax S 35mm SLR made by the East German firm VEB Zeiss Ikon. It was also adopted by the East German firm KW on their Praktica range of cameras, introduced around the same time as the Contax S. In the early 1950s the mount was also used by the West German firm Wirgin on their Edixa Reflex range of cameras. Later (1957) it was adopted by Asahi for the Asahi Pentax family of SLRs which sparked the Japanese camera industry. In the 1960s several other Japanese manufacturers also adopted the mount for their new 35mm system cameras. It was also used by the Russians on Zenits from the second production run of the Zenit E onwards.

In 1956 the Contax F introduced an internal aperture stop-down pin located at 6 o'clock inside the lens mount. Versions of this innovation were adopted by practically all subsequent users of the M42 mount (with the exception of preset or T mount lenses), though early adaptations varied slightly by manufacturer. By the early 1960s the diaphragm actuation mechanism had been standardized as many more companies began using the mount for their system 35mm cameras. Praktica was once again an early adopter.

In 1959 both VEB Zeiss Ikon and KW were absorbed into the new East German Pentacon camera manufacturing consortium. All subsequent Pentacon 35mm SLR cameras (most of which were continuations of VEB Zeiss Ikon or KW lines) of the 1960s used the M42 mount.

Despite the standardization of the diaphragm actuation mechanism, there was no industry standard for communicating the aperture ring position to a TTL light meter. Before screw-mount lenses faded from the scene, Mamiya, Pentax, Fuji, Olympus, Zeiss Ikon and Pentacon all introduced mutually incompatible systems to permit open-aperture metering; but the majority of TTL metered M42 cameras simply use stop-down metering instead.

In the 1970s, as camera electronics and in-camera metering systems rapidly became much more sophisticated, requiring very accurate mounting tolerances to establish electrical contacts between a camera body and lenses, the technical limitations of a screw-mount lens system quickly rendered the M42 mount obsolete. The M42 mount was progressively replaced by bayonet mounts by all the manufacturers that used it, except on some Zenits. Recently Cosina Voigtländer reintroduced a 42mm screw mount SLR with the Bessaflex TM (2004).

Glassless adapters have been marketed that will allow M42 lenses to be used on bodies with the Pentax K-mount, the Canon FD or EF mount, the Nikon F mount, the Minolta MD or α mount, the Olympus OM mount, the Konica AR mount, and other 35mm SLR mounts. Some manufacturers wanted to maintain continuity and offered user-friendly adapters with the ability to push the aperture pin automatically for stopping-down. Those adapters were made for cameras with Fuji X-mount, for some cameras with Rollei QBM-mount (e.g. Rolleiflex SL35), and for the Mamiya NC1000(s). Adapters are also available to use M42-mount lenses on virtually all digital mirrorless interchangeable lens cameras as well.

There are currently no reviews for this product. Be the first one to review Aroma Auto 2X Tele Converter M42 Screw fit in case

Delivery will be made by Interparcel, you will be able to track your order online to find your scheduled delivery date. Any deliveries scheduled to arrive on the Saturday or Bank Holiday will be delivered the following working day. We aim to dispatch your order within 24 hours of the time the order has been placed.

Looking after your camera

Use a Camera Bag

A camera bag does more than just protect the camera against scratches and dust: It keeps it safe from rain because many are waterproof on the outside.

Be Very Careful Around the LCD Screen and Camera Lens

Never Leave Your Batteries in Your Camera for Too Long
Many camera batteries are now alkaline or lithium formats. If you keep your camera with the batteries inside of it in a moist area, then the batteries can get corrosive. So if you’re thinking about just putting your camera on the shelf for several months, do yourself a favor and remove them.

Turn Your Camera Off Prior to Doing Anything

Cold and Wet Weather Can Wreak Havoc on Your Camera Body
Take your camera out only in a waterproof bag. If the weather’s unusually cold, just wrap your camera in a plastic bag that has silica desiccant packets for the reduction of moisture. It’s also a smart idea to have a soft towel with you to wipe off any moisture, just in case it should get on your camera.

Use a Filter to Protect Your Camera Lens

The lens of your camera is naturally fragile. As such, it’s susceptible to scratches, cracks, dents…you name it. A UV filter will not only will you give your lens a fighting chance, but you’ll also enhance the quality of your pictures.

Condensation Can Be Controlled

Condensation normally happens when you move your camera between different temperatures.
Allow your camera a chance to naturally get used to the hotter environment. Don’t place it inside a closed plastic bag when transporting it between different temperatures! Just let the camera sit in the humid temperature for a while, until condensation disappears.
If this still doesn’t get rid of all of it, you can utilize a soft cloth to wipe away any remaining moisture and marks left behind from the condensation.

You may also want to consider these